What to do when you don't agree with your CSA assessment 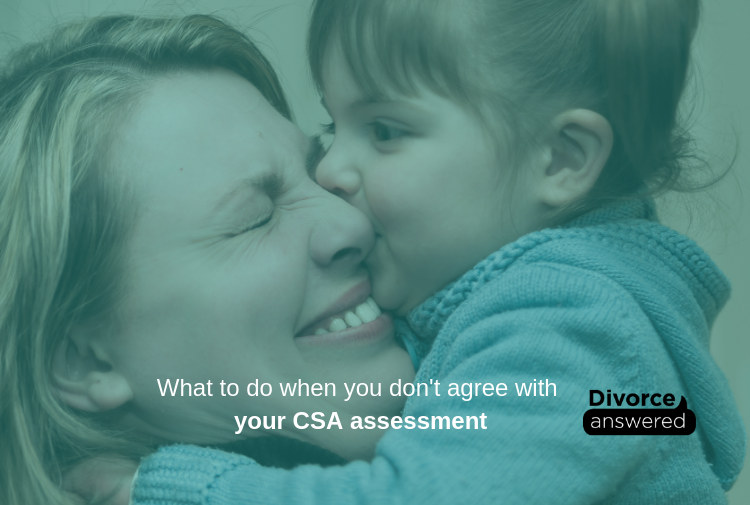 There is often a misconception about child support and what it contributes towards. Quite often, the parent who is ordered to pay child support tries to minimise their income. When you find yourself in this situation, whereby the other parent has intentionally minimised their income changing their assessment, there are a few things that you can do.

According to the Australian Institute of Family Studies, the weekly costs of raising a child range from $140 for unemployed families and $170 for low-paid families.(1) Sadly, the cost of living keeps rising which also means that the cost of raising a child hikes up each year. The study highlighted that the most expensive parts of a household budget are the rent, food, household goods and services.

So, when I was given a child support assessment of $7.35 per week for two children, I felt it was unfathomable by CSA to allow it. It is insulting to think that CSA (or the government) might believe that the cost of raising two children is could be less than $200 per child per year and it is in stark contrast to the AIFS figure. For this reason, CSA payments are limited to a ‘contribution’ towards the cost of raising a child because they certainly don’t match the true costs.

I believe that my children’s father thinks that our children live off fresh air! That the children have no needs, don’t need to be fed, clothed or entertained – well, that is what I believe when their father pays $7.35 per week for two primary-school aged children (that is when it is actually paid). When their other parent chooses not to pay child support, chooses not to work or feigns an illness, ultimately, it is the children’s quality of life that suffers. I feel as though my children’s other parent has tried every trick possible to get out of paying minimum child support!

Once, my children’s other parent offered to pay above the CSA rate (which I objected to and my objection was refused) and then didn’t pay the amount he agreed to pay. He accrued $18,500 in debt to me and without being asked and while grossly out of their scope, CSA reduced the debt to $24. I am positive their other parent worked for cash or in other ‘unofficial’ ways without declaring. During a change of assessment process, my children’s father decided to change jobs and take a pay-cut (the original income amount was withheld because he changed his job by choice). I have endured CSA accepting almost 6 months of ‘nil’ income (which we all know is virtually impossible with government support).

Despite my best efforts, I had a legitimate answer to all objections and concerns that the CSA representative had about the other parent and their ability to work … and the response was “oh well, they can’t hold down a job”. CSA, without realising it, is enabling selected parents to rort the CSA, Centrelink and ATO systems and neglect their duties as a parent.

What is child support:

Child support is the minimum amount of money set by a government organisation, Child Support Agency/Australia, based on a combined income for both parents, less a “self-support” figure and then the calculation of child support is divided between the parents based on the number of nights care. Child support is a contribution (yes, a contribution) towards the cost of keeping a roof over the child’s head and basic necessities like food and water. While many people criticise the system and CSA calculation, it is the framework that we have to work with.

Child support is a flawed system:

No matter who you speak with at child support, you will inevitably get a different interpretation of the child support rule and regulations.

Tactics that some parents employ to avoid paying child support:

• Not lodging their tax returns. If their income is higher than what they previously declared to CSA, they will refrain (sometimes for many years) from lodging a tax return.

• Working for cash and not declaring it

• Intentionally not working and living-off another person

There are some instances when a nil income is registered and accepted by CSA. These may include:

• The parent has been incarcerated

• The parent is overseas

• The parent is starting a new business

• The parent has received an inheritance and isn’t working

What is interesting about the nil income assessment is that the parent is supposed to offer proof. However, CSA doesn’t feel that lodging a nil income assessment should be completed as a ‘change of assessment’ on the designated form and that the other parent doesn’t need to have this information shared. I believe that the lack of transparency exposes CSA to more criticism and creates more angst than it needs to be.

What to do if you don’t like the revised change of assessment:

How to secure funds or the payment of arrears:

How you can secure funds:

• When the parent lodges a tax return, CSA can take the credited funds as they are deposited to their account.

• When the parent receives an inheritance, distribution or other financial windfall, advise CSA so they can monitor the accounts

• When you know where the other parent is working, you can advise CSA and they can investigate or enquire further with that company

• Create a Binding Child Support Agreement which outlines the financial responsibility of each parent beyond the minimum child support. This can be lodged with CSA when both parents have at least 35% of care, each parent has had independent legal advice (which is mandatory for a BCSA) and CSA can either collect the BSCA funds via private collect arrangement or you can have CSA collect it for you.

Remember that being the primary parent isn’t the easiest or simplest of tasks. What may not be appreciated by every spends-time-with-parent is that being the primary parent is a financially burdensome task that CSA’s minimum child support assessments cannot possibly help to significantly assist without the other parent being generous or having a Binding Child Support Agreement. The challenge for all parents in receipt of child support is to find a way to work within the system (flaws and all) and if the system isn’t working for you despite your best efforts, then find some peace.