Successfully navigating Divorce and trusting in the process [personal perspective] 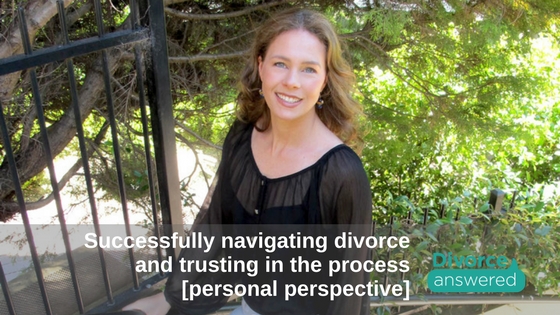 Rachael Scharrer, Divorce expert and founder of online resource, DivorceAnswered.com.au, shares the successful elements of her divorce and how she had to trust the process and outcome.

No one starts a relationship or marriage with the expectation of ending in divorce. Sometimes we can’t help the path that our marriage takes and can only make the best of the situation that we find ourselves in. I was no different. In hindsight, I married a fictitious character and the actor couldn’t keep up the act. There is a saying, ‘the truth will always catch up with you,’ and when it did, my marriage couldn’t survive - but I thrived.

I was unhappily married for 4 out of 5 years. There were intricacies, complexities and challenges that none of my friends were having to deal with which included mental health, addictions, domestic violence and more. When I reached out to friends, they sometimes thought I was exaggerating – my mind isn’t sufficiently creative to come up with such detailed and colourful stories! We ultimately ended up in the court system trying to finalise the union and the greatest concern surrounded parenting.

There was so much evidence and information that I had to share and impart with the court supporting my grave concerns for the safety of my children. I didn’t need to fabricate any stories or mince my words. The harassment, intimidation and threats had been so great that I chose to stop communicating directly and only allowed SMS and email between him and I. This ultimately worked in my favour because all of our interactions and his abusive messages were formally documented and could not be disputed.

When I compared the multiple affidavits submitted by my ex-spouse to the court, each and every one was different and told a different story. His inconsistency, lack of detail and clarity continued to work against him.

I often wondered why my lawyers were so relaxed with me. I was an ideal client – I was motivated, organised and prepared. I ensured that I did as much of the leg-work as possible to keep the costs down. I kept a detailed log or diary, I regularly summarised the diary into categories and chronology. I filed screenshots of messages and emails. While I had a thirst to know exactly what was going on at all stages, it worked in my favour and I was able to better support my legal team by pre-empting the information that they required at all stages. I was a stark difference to my ex-spouse who didn’t pay attention or adhere to the advice given by single-expert witnesses, family court writers or medical professionals.

My ex-spouse used to send nasty messages or says nasty things to invoke a response on a daily basis (even multiple times each day). The most frustrating thing for him was that I returned with silence. I refused to stoop to his level and participate in his ridiculous and fabricated games. The messages which were abusive, threatening and intimidating in nature, reduced in frequency over the years. I minimised phone contact and limited communication to SMS and emails. I quickly learned that when a message did come through, I saved it for after the children were in bed because they often upset me and spoiled my time with the children. I made a personal rule never to respond or react when upset or angry. I know that this infuriated him even more.

I was aware that being detailed, thorough and being specific with time, dates, direct quotes and how it felt was crucial to being believed or not being believed. It adds clarity and clout to your story. It could make the difference between getting what you want and being unfairly judged. When something significant happened in the marriage, I used to think “I’ll remember that,” but there were so many significant events that over the years they all started to merge and dates and time became muddled. Making notes and diarising every detail in my separation became a cathartic activity. It allowed me to download the day’s events and gave me the mental space to sleep well and focus on my family. The detail and thoroughness of my court documents meant that my version of events was more plausible than my ex-spouse’s.

When it came time to Family Dispute Resolution, I wondered why my lawyer didn’t brief me. I had heard about some lawyers prepping their clients before a family report, seeing an independent specialist or hearing and I wondered why my lawyers didn’t ‘coach’ me. Because of my transparency, the lawyers never felt the need to prepare me at any point in my proceedings and they knew when I was pushed, I had nothing but the truth to tell.

I continued to be a model client (which kept my legal fees lower) by remaining consistent with my requests and needs in parenting orders. I took some time to consider what would be in the children’s best interests, what would suit their father and I as well as what is feasible within the concerns that I had. I was willing to take a disappointing financial settlement to secure my financial independence. However, the safety and wellbeing of the children was the priority and I made sure that it was what I secured in all parenting matters. I made an initial request and we stayed with it until further proof (I was open to the negative as well as the positive) was provided before ‘changing course.’ I believe that the consistency maintained was exactly what worked in my favour (or more accurately in the children’s favour) in the end.

My biggest challenge was to learn acceptance for our situation and what was happening. I couldn’t control what he did, how he did it and what he did in his time with the children. Every time I think of this, the lyrics to Frozen’s “Let It Go” run around my head on repeat. My children regularly heard me singing the lyrics aloud (and poorly) as I consciously reminded myself not to let things get to me easily.

I was once asked at Family Dispute Resolution “what type of relationship do you want your children to have with their father?” My response was simple “ideally, the one that I have with my father, however, I can’t force the relationship I have with my parents on to my children and their father.” The relationship that my children have with their other parent disappoints them and I regularly. I always held a hope that he would change or want to become a better person for their benefit. While the children’s father is not the person that I would pick for them today, they are learning their life lessons - it’s just happening at a younger age. We manage by using strategy to speak up (yes, the primary aged children are loud and clear with what they want and like). Further, by not trying to change or control the situation that we find ourselves in, the children are learning who their father really is and it saves the constant disappointment when their built-up expectations aren’t met. I have learned that because we can’t change our situation, I can only love my children through their feelings.

I know that my ex-spouse would have wanted me to have tried harder – given him more attention and put forward more effort to get him to the help that he needed. But the truth is that I needed to exercise self-preservation for the sake of the children. My children essentially had one functioning parent and they needed all of the support, love, care and undivided attention that I could offer them. I understand that my ex-spouse was struggling and didn’t have his family’s support, but his destructive nature was de-railing me from my number one role as a mother and provider. We all know that for someone to change, they need to intrinsically want to change and I knew I couldn’t force my position upon anyone else.

As a parent, I could only make the best decisions possible with the information that I had available at the time. By maintaining a higher standard of behaviour and by keeping my composure, I sailed through the divorce process with a lighter heart knowing that I played fair for the benefit of everyone involved.