Should Children Share a Bedroom? Considerations for and against it 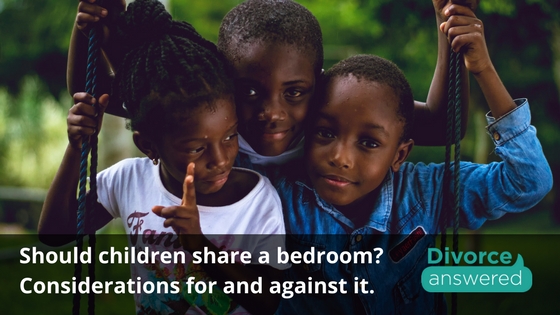 As urban and metro areas become more densely populated, housing and blocks of land become smaller. More people are being forced to share a smaller space. For many people separating, splitting the family income and maintaining two residences becomes more of a financial burden causing most to downsize. Rachael Scharrer, founder of online resource, DivorceAnswered.com.au, knows this challenge well and the impacts on raising a family.

When I separated, my children were 1.5 and 3.5 years old, respectively. They began sharing a bedroom until they were 4.5 and 6.5 years old. It was the hardest three years of my life. We had moved into a run-down semi that had only two rooms. I put the children into the master bedroom which accommodated their beds, toys, clothes and paraphernalia. One of the two children would keep the other awake at night and one of the two children would wake the other early in the morning or wake the other to be escorted to the bathroom. They took it in turns sleep depriving the other. Unfortunately, I wasn’t able to offer any alternative and did the best that I could to give the children their own spaces within the one bedroom.

My sanity was restored when we moved into a bigger home and the children had their own rooms, their own space and knew which were their toys. They could create the space that they wanted and play on their own or invite their friends and sibling in at will.

I believe that it socially acceptable for siblings to share a room when young, provided that they don’t annoy each other and keep each other awake at night. No matter whether it is two sisters, two brothers or a brother and a sister sharing a bedroom, as long as children up to age 10 receive 10-14 hours of quality sleep each night and are otherwise happy with the situation, then the arrangement is working.

Families who have one with a special need, requires more attention or has (say) night terrors, may want to prioritise separate rooms for the children so that they have some sense of space, peace and an escape.

Similarly, in blended families, accommodating ‘his,’ ‘hers’ and ‘our’ children often means that sharing a room is a must. One of the biggest challenges is whether the children’s rooms are delineated by gender (The Brady Bunch TV series) or by offspring of each parent (Yours, Mine & Ours movie).

Once children approach puberty (say age 10, or even earlier in some families), it is a good idea for children to have their own space, especially if your children are of different genders. Their hormones, body and self-identity is morphing into that of an adult. Having some privacy and self-expression space it is wonderful for the children, if you can afford it and if where you live allows for you to offer them space.

In a separated family situation, parents need help children feel comfortable in each home. It is particularly important for the children to feel like the spend-time-with parent’s home is their home too. One big error is having your child share a bedroom with their parent. It doesn’t convey to the child that they have their own space, privacy or any ownership of the home.

It’s rare for parents to speak up and say “my children don’t want to sleep on their own.” Some siblings in families want to share a room – even in their teen years – and some families have no choice but to keep children in the same room while living with their parents. If your children do want to share a room and if you can offer them flexibility of changing their mind in the future, use the extra bedroom in the interim as a playroom, study or guest room.