Getting the most out of mediation with advice from expert facilitator 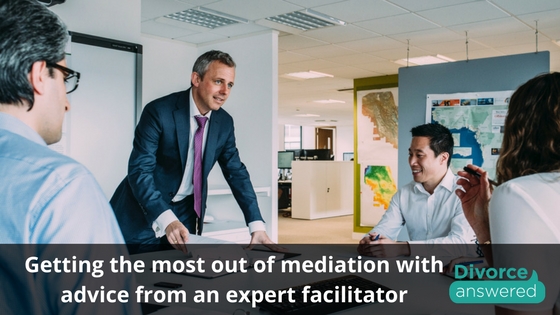 When an expert mediator wants to share tips on how to get the most out of your mediation or family dispute resolution, it’s time to start taking notes! Rachael Scharrer, divorcee, single parent, founder of DivorceAnswered.com.au and past participant in the mediation process, had the opportunity to speak with experienced mediator, Jeremy Bluhm of Relationships Australia. He shared his tips on approaching mediation from the perspective of a facilitator and how to get the most out of each session.

Rachael Scharrer went through mediation (or Family Dispute Resolution, FDR) three times and reached small milestones through the process. Even though she wasn’t able to settle her parenting matter through FDR, it doesn’t mean that others can’t make the process work for them. She approached FDR not knowing what to really expect or how it was structured. Since then, she has learned that it is a confidential, “without prejudice” opportunity to discuss what you believe are the appropriate terms of agreement for parenting, financial, property and other relevant matters.

“Mediation is an opportunity to have a conversation that maybe you weren’t able to have at all with the other parent,” said expert facilitator Jeremy Bluhm, “but how far you get with that conversation depends on how each of you approaches the meeting. The mediator doesn’t make decisions for you, so ultimately you need to reach out to the other person somehow to get a good outcome. That can be hard when there are bitter feelings, but practically speaking, it’s necessary.”

According to Jeremy, too many people go into mediation with misconceptions, therefore missing the opportunity to create an agreement. Common mistakes clients make include:

Jeremy stresses that the facilitator will assist you but will not tell the other person what to do or convince on your behalf. “It is up to you to get the other person on the same page as you” says Jeremy and he shares three tips on how to be heard and make the most out of the mediation:

In high conflict relationships, mediation can occur with each parent in a separate room. Such a mediation – with the mediator “shuttling” between the two parents – can take more time and doesn’t give the parents the chance to hear each other directly. But it’s available as an option. If you’re uneasy about being in the same room as the other parent, bring it up with the mediator, but consider whether you could start out in the same room and see how it goes.

By implementing the above tactics, remaining respectful, acknowledging the other party and keeping the bigger picture in mind, you will be more likely to come to an agreement during the mediation session. If you need another session with your ex-partner and provided that you are both open to it, then schedule another session to finish the process. It is far cheaper to resolve the agreements and settlements in mediation than participating in a protracted court case in an already overloaded court system.

Jeremy is also available privately for mediations or conflict coaching and can be contacted at jeremy@bluhmtalk.com

For another article about FDR, its structure and Section 60I Certificate, click HERE