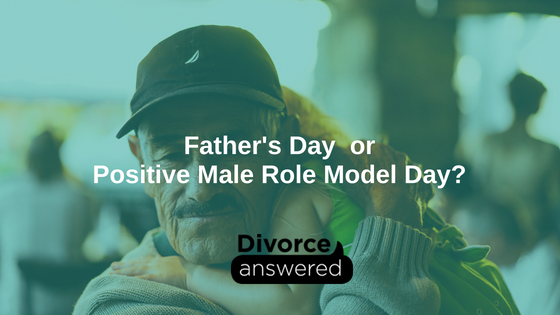 As a solo mum of two children, Rachael Scharrer, divorce and relationships expert and coach, found herself in a particular conundrum last year for Father’s Day. Her children found the solution!

My children for the past six years have celebrated ‘Grandfather’s Day’ or ‘Uncle’s Day’ on the first Sunday in September… that was until last year. I was presented with the conundrum of how we will mark the day when their Grandfather was out of the state and their uncle was out of the country. How could both father-figures be away at the same time for Father’s Day?!

I thought that it wasn’t fair to the children if I chose not to recognise the event, especially when there are so many other children marking the occasion.

“We have a challenge this Father’s Day. Granddad is away and Uncle is overseas. What do you want to do?” I asked tentatively. I expected the children to respond with ‘I want to have the day off school.’

Instead, they asked for the person that I had been dating for about 9 months to go with them. My mouth dropped. I may have gone white. I wasn’t ready!

I realised that it was me making a bigger deal out of the day that it needed to be … They just wanted to go to school, eat breakfast and have a great time with their friends while showing off their school to my ‘friend.’

With a nominated ‘positive male role model’ attending the breakfast, I was able to come up with a number of school dads that would have been delighted to take my children to the Father’s Day breakfast. I am blessed to have so many options available to me as alternatives for Father’s Day to their biological father.

Today, even in married or committed relationships where there are two parents at home, mums and dads are working longer hours. Generally speaking, the men are having less one-on-one time with children on a daily basis. This means that creating quality time and modelling the right behaviours in the limited awake time available is more important than ever before.

In the absence of a Father, children need to have positive males that can help shape and round-out the person that they will become. Having the right types of men in the lives of children teaches them how to be a great man in the future – emotionally, mentally and physically.

If you don’t have a father for your child, you can always do or make something special for a positive male role model in their life. You could consider their grandfather, uncle, neighbour, friend’s father, doctor, teacher or friend … Father’s Day, Uncle’s Day or Positive Male Role Model Day – the choice is yours. What is important is that you recognise an influential and caring male who makes a difference to your lives.

Tips for a successful father’s Day

Navigating Father’s Day for Children of Divorce and their Dad

When Should Your Child Celebrate Your Partnre for Father’s Day?