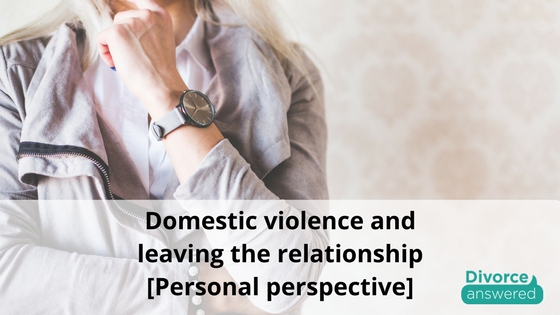 Rachael Scharrer founder of online resource, DivorceAnswered.com.au, shares her experience and advice for leaving a relationship involving domestic violence in the lead up to White Ribbon Day.

My marriage wasn’t perfect. In fact, no marriage is absolutely perfect. While we all want to portray a great relationship, the truth is that “you don’t know what happens behind closed doors”. My marriage was littered with elements that I wasn’t comfortable with. The signs were there quite early on and I consciously chose to ignore or excuse them.

Once I became pregnant, my husband’s controlling behaviours exploded. Our relationship quickly became defined by his incessant calling. I couldn’t make any arrangements or plans without his approval and if I wasn’t where he wanted me to be and when he expected me there, his aggression escalated. With his increasing verbal and physical anger, I tried to change myself and the way that I approached him in the hope to diffuse situations. I did my best to conceal the reality I faced from friends and family.

I was fortunate to live near my family and felt that I had a Plan B in anticipation for when the relationship finally ended. With a growing family, we moved homes to enjoy the benefit of a small backyard. I had not realised that my Plan B wasn’t an option anymore. I felt exposed in unfamiliar surroundings.

After driving away all of my male platonic friends, he started to create wedges between family, friends and myself. He even suggested relocating to an isolated fishing village and I seriously considered it to save my marriage.

The last time that he broke up with me, I thought about the children. They were both displaying behaviours that were not age appropriate. I had a 3-year-old who was acting out because he never got time with me and a toddler who displayed anger issues beyond her years. I took a moment to reflect on the family as a whole and I realised that it wasn’t a healthy relationship and it hadn’t been for a long time. This was the tipping point and I wasn’t going back to that relationship again.

Sometime after the relationship ended, domestic violence discussions became more prevalent in the media and I looked it up. Domestic violence comes in many forms: emotional, physical, mental, verbal, sexual and financial. I was shocked to learn that I was being groomed for far more severe forms domestic violence than I had already experienced. Isolation, control and anger were only a few elements of domestic violence that I had encountered and shared above. I was also subjected to verbal, physical, financial and emotional abuse. I was shocked to learn that threatening suicide or threatening to kill another person, stalking and intimidation are also forms of domestic violence. If I knew then what I now know today, I would have made attempts to leave the relationship far earlier. Hindsight is 20:20 vision.

Social media challenges our sense of self and the societal norms. Many people only share their great, wonderful and amazing moments and achievements. It sometimes feels like we have to ‘put on a face’, create a façade for our friends and make out that everything is more wonderful than it truly is. It is only when we, as a community, start to openly discuss the issues and challenges that we face on a daily basis that we are better able to support one another and collectively make a change. Neighbours, friends and family who are knowingly aware of any individual struggling with domestic violence often don’t want to get involved. They chose not to support, act and defend the victim and are inadvertently supporting the abuser which makes the victim’s struggle to leave and change the relationship much harder.

I became friendly with a woman whose story is too familiar for so many other people. She wasn’t willing to tolerate certain social behaviours in the marriage anymore which created friction and violence. When things got really bad, she retreated to a family residence for a night or two of solace. Despite knowing what she was experiencing, the family remained mute and sent her back to the violent relationship. It wasn’t until she turned to new friends that she broke free from the reoccurring cycle of domestic violence and finally summoned the strength to make a lasting change.

As a human being, if you see something that isn’t right, then it probably isn’t – you are morally obliged to help.

There are ways you can find and get help if you are experiencing domestic violence:

Domestic violence is nothing to be ashamed of. It takes a brave person to ask for help and make the change. When you are informed and when you know what support is there for you, you will be more confident taking positive steps towards a brighter future. Children are the inadvertent victims of domestic violence and they rely upon their parent to make the self-sacrificing decisions for their future, safety and benefit. The decisions that you make today will make the difference between continuing the domestic violence cycle or breaking it and being free. By choosing to stand up against domestic violence, you are changing attitudes, increasing awareness and making a positive mark on society and our community.

DivorceAnswered.com.au also features a comprehensive FREE Separation Checklist for individuals who are planning separate or find themselves separated and needing to prepare for the future.