Divorced and Dating. The Two Types of Women 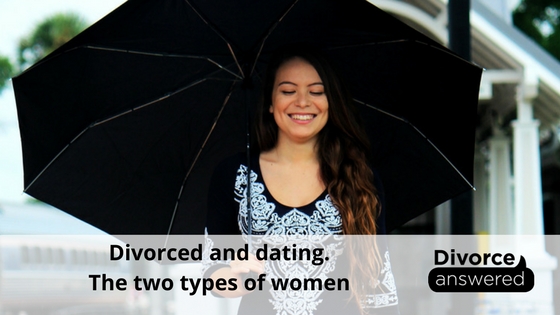 (Rachael Scharrer, divorce expert and founder of online resource DivorceAnswered.com.au shares her personal perspective and observations of divorcees and dating.)

In 2012 my marriage was irreparable. Within days of my separation, I had two other girlfriends also separate. Incidentally, I have met and supported many women throughout their separations and listened to many more separation stories. In that time, I noticed two different groups of women.

The first group are the girls who are actively seeking their “knight in shining armour.” These women really want a man to pay their bills and give them a lifestyle. They are actively dating and pursuing the attention of wealthy men. When they met a man, they believed that he is the one. They are on cloud-9 from the outset of the relationship and the break-up is soul destroying. For some women, they haven’t learned their lessons from each relationship or marriage and continually make the same mistakes. Other women have been so desperate to have a man pay their bills, they have excused the bad behaviour repeatedly to their own detriment. This group of women are stuck on the same hamster-wheel until they choose to change their attitude, behaviour and motivation and ultimately the outcome.

I confess that I often preached to these friends: Don’t introduce your man to the kids too early. Don’t have him stay over when the kids are home. Meet on common territory, like at the park. Don’t let the kids get too attached to the man. Don’t give too much of your generosity to a man who isn’t reciprocating. Make sure you date. Don’t jump into living together too quickly just because you want financial support. Don’t let your man move in so early.

I was a part of the second group – the “worm,” an attention avoider. With a tumultuous divorce, I knew that I was better to be on my own because the drama was too much for me so I assumed it would be too much for someone else. I believed that no man would want to be involved with me at this time. I wasn’t swearing off men, I was just prioritising where I spent my energy. Some women believe that they will never meet another life partner; only time will tell whether this is true for them. However, I knew that I would meet someone, I just didn’t have any timeframe expectations or pressures.

In the recent past, I was fortunate to meet someone rather special. It wasn’t until now that I realise why my friends were so fast to introduce their men to the children – because it was easier. As a single parent on a budget, paying for babysitters wasn’t always an option. As a result, the new man was over at my house earlier in the relationship than I would have liked in an ideal situation. He lived a little further away which meant that the sleep-over arrangement also started earlier than planned.

One of the essential ingredients to a successful relationship is feeling whole with a strong sense of self, self-worth and self-love. When you have achieved this, the motivation for being in a relationship with someone should be for companionship, common interests as well as respecting each other’s individual interests and about what you can offer the other person while being open to receiving the love, kindness and generosity of the new man.

When you meet someone, who isn’t imposing upon the children or the household, can value-add to your life and the family, positively role model adult to adult as well as adult to child interactions and can show children how their mother deserves to be treated … then they are a keeper. Of course, the future partner needs to be an intrinsically good, kind, honest and loyal person.

I feel like I have done a 180 degree turn on my perspective of a single parent dating. I finally understand some of the motivations and benefits, as well as some of the pitfalls, of dating as a primary parent. While I don’t believe that I am the first group, I currently sympathise with them and finally appreciate their predicament– I don’t mean to rush the relationship but the ‘flow’ is really fast and I seriously sympathise with other divorced parents.

No matter how scary separation can be or how difficult divorcing is, rushing into a relationship to escape your troubles will not make the problems disappear. Taking the time to adjust to the changes in the family and the financial situation before allowing another person to invade your ‘safe-space’ will only make for a better future relationship. The success or failure essentially starts and ends with you - Choose wisely before taking the relationship leap.