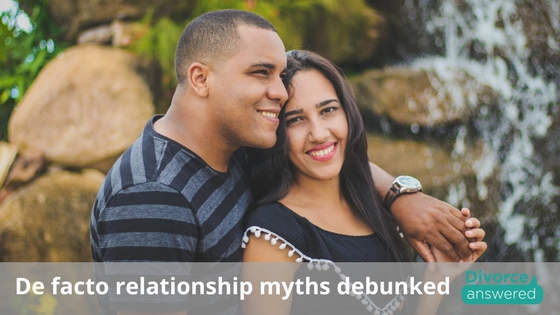 All too often we hear couples in long term relationships say that “marriage is only a piece of paper” or “we didn’t get married because we don’t want to get divorced.” Unfortunately, these couples don’t realise that they are actually part of a de facto relationship – which qualifies for all of the rules and regulations of a marriage.

Section 4AA of the Family Law Act 1975 defines a de facto relationship as when you and your partner (of opposite or the same sex) are engaged in a relationship as a couple living together on a mutual, genuine and domestic basis. The exception to this definition is if you are legally married or if you are related to your partner.

Myth 1. When the relationship ends, you are not obliged to split assets “There is a de facto living together rule in the Family Court for financial settlements. However, it is recommended that you consult a family lawyer in regards to your particular situation. Just because assets may be in one person’s name, it doesn’t disqualify your ex-partner making a claim upon those assets. If you don’t make formalised financial settlements, your ex-partner can claim on the asset pool. Similarly, at the end of a de facto relationship, assets aren’t split equally at 50⁄50 either.”

Myth 2. If we don’t get married, then we don’t have to get divorced “You still have to legally prove the end of the relationship with your ex-partner and that can be just as costly as being married and divorced. De facto relationships follow the same rules as marriages and can experience the same complexities.”

Myth 3. A couple need to live together for six months to qualify as a de facto relationship “There isn’t a timeline for being considered de facto and there is no minimum time period. Provided that you or your partner live together, consider yourselves in a committed relationship and friends and family recognise this, then you may be in a de facto relationship. For a relationship between two parties to be classified as de facto, it must be ‘marriage like.’ To determine whether a relationship is ‘marriage like’ there are a number of factors the court must consider. This includes the degrees of financial dependence, whether there are children involved and the ownership, use and acquisition of property.”

Myth 5. The Family Court can’t make orders regarding children of a de facto relationship “This isn’t true. Although different legislation applies to nuptial and ex-nuptial children, the Family Court has the ability to make such orders if it is considered to be in the best interest of the children, including parental responsibility and with whom a child lives and spends time with.”

There is also a type of relationship that is not commonly known, which is ‘De Facto By Distance.’ This means that even though you aren’t living together, you exclusively stay at each other’s place when you are together and qualify for other elements of the de facto relationship (in social, commitment and sexual natures). As soon as your partner’s mail arrives at your address, they can legally make a de facto claim.

You have to apply for de facto financial orders within two years of the breakdown or end of the relationship. One way to protect yourself against any financial claim or ‘messy aftermath’ is to create a Binding Financial Agreement. This can be written up either before the commencement of the relationship or during the relationship. This agreement will outline the distribution of assets and liabilities and how and whether any maintenance is required. The agreement will need to be lodged at the Family Court and must be done with the advice of independent lawyers.

If you think you are in a de facto relationship, it’s definitely worth getting some legal advice!