10 Ways Children are Misused in Divorce 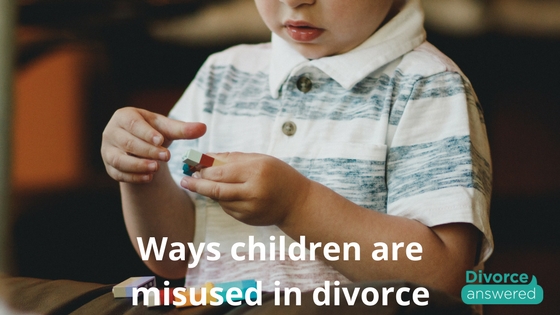 Too often parents complain that their ex-spouse is using the children as ‘weapons’ in divorce. While a parent may think nothing of their choices or actions, the long-term ramifications of this can have life-long detrimental aftershocks for the child, the innocent party of divorce. There are too many ways in which parents can misuse their children and to the extreme, these tactics can be a form of child abuse. Listed below are just a few common ways parents are either intentionally or unintentionally misusing the child:

Your child is half you and half of the other parent. By openly ‘hating-on’ the other parent, you are essentially ‘hating-on’ your child. By exposing children to destructive, aggressive and unfair separation tactics, you are potentially damaging your child’s self-worth and some children do not recover. It is often said that children “will eventually work it out for themselves” – they will make up their own mind about which parent tried to make the relationship between them and their other parent work and, in the end, the child won’t be able to blame you for the other parent’s short-comings.